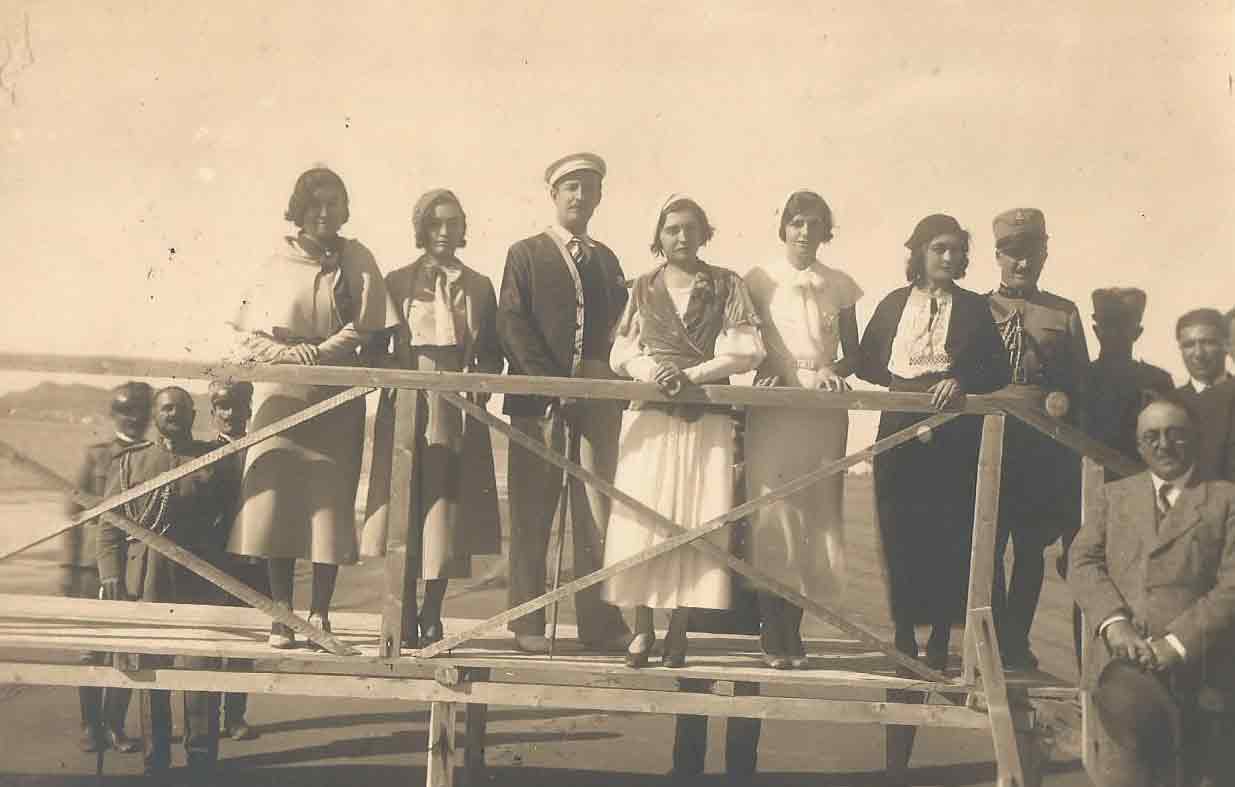 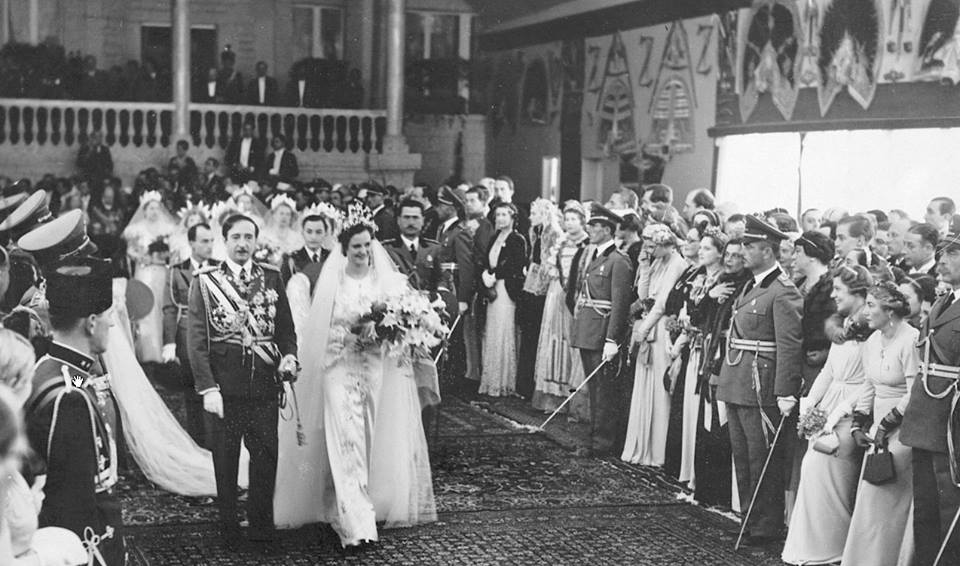 On 27thApril 1938 King Zog married Countess Geraldine Apponyi in Tirana.
On 5th of April 1939 Queen Geraldine gave birth to the Crown Prince, Leka I. Only two days later, on 7th of April 1939 Fascist Italy invaded Albania. The Albanian Gendarmerie and government supporters held the Italian forces off for a few hours, until being overwhelmed by superior firepower and numbers. Casualties were suffered on both sides. In order to protect Albanian sovereignty, the Albanian National Assembly, in accordance with the constitution, voted to authorize King Zog permission to leave Albania. King Zog never abdicated. Three days after the invasion, just before midnight on 9thApril 1939, King Zog crossed the border into Greece, then onwards to Turkey on 2ndMay 1939.


The Royal government was forced into exile, with over two thousand loyalists. King Zog made the decision to move to France, where he could better co-ordinate allied support to liberate Albania. The journey to France entailed a trip across free Europe, Romania (1stJuly 1939), Poland (7th July), Latvia (12thJuly), Sweden (18thJuly), Norway (23rd July), Belgium (7thAugust) and finally reaching Paris, France (8thAugust 1939) and settling in the Chateau de la Maye in Versailles. On 27thJune 1940, the Royal Family left Bordeaux, France for England, with 35 members of the Royal Court. They escaped only 8 hours before the Germans over-ran that area of France. The British officer who co-ordinated the trip was Commander Ian Fleming, who would later become the “James Bond” author.
In London, King Zog and the Royal Family would stay at the Ritz Hotel during the German Blitz (bombing of London).This was followed by a brief stay at Forest Ridge, a house in the South Ascot area of Sunninghill in Berkshire. Then later in 1940 they moved to Parmoor House in Buckinghamshire. These many moves were necessary to avoid the bombings.
During the war years in England, King Zog would continue working for Albania’s liberation from Fascist, Nazi and Communist control. The Royal Government in exile lobbied and co-ordinated operations through Abaz Kupi and the Royal forces in Albania. King Zog went on to forge friendships with President Charles de Gaulle of Free France, as well as with General Wladyslaw Sikorski of Poland and other leaders and Royals in Exile.
In 1946 the Royal Family moved to Egypt at the behest of King Farouk, where they lived on the eastern outskirts of Alexandria, along the Corniche, at Ramleh. In 1949, just before the Arab-Israeli War, King Zog lobbied the Arab League to resist the Albanian communist regime.
In 1951 King Zog visited the United States of America and bought the Knollwood Estate in Muttontown, New York, but he never occupied the estate and sold it in 1955.
The Egyptian coup d’état of 1952 changed the situation; President Gamal Abdel Nasser made things difficult for the Royal Family in Egypt. Through the direct support of King Faisal bin Abdulaziz of Saudi Arabia and the Arab League, King Zog was given protection from the Egyptian Socialist Union.
In 1954 King Zog organized covert operations, with Anglo-American support, against the communist regime in Albania. Tragically, the missions were betrayed by a British spy, Kim Philby, who was working as a double agent for the Soviets. As a result many Royalists were captured and killed.
In July 1955 King Zog and the Royal Family returned to France to settle in Cannes. His health started to deteriorate, and any hopes of relocating to the United States of America became impossible.
H.M. King Zog passed away in Foch Hospital in Suresnes, Paris, on 9th April 1961, aged 65. He was buried at the Thiais Cemetery in Paris. On 15th November 2012, in the presence of Albanian Government representatives and an honor guard of French Legionnaires provided by the French President François Hollande, King Zog’s remains were disinterred and then returned to Albania.
On 17th November 2012, the Albanian state held an official ceremony for the reburial of His Majesty King Zog at the newly rebuilt Royal Family Mausoleum in Tirana. This was done as part of the commemoration of Albania’s independence centennial. The ceremony was attended by both the Presidents of Albania and Kosova, Government Ministers, foreign dignitaries and leaders from all the Albanian regions.


During the 1920s, Albania was experiencing extended periods of political turmoil and instability.
After the early elections on 25thAugust 1928, the parliamentary deputies from the southern region of Skrapar proposed that Albania should once again be declared a Monarchy. This proposal was accepted and taken under consideration. 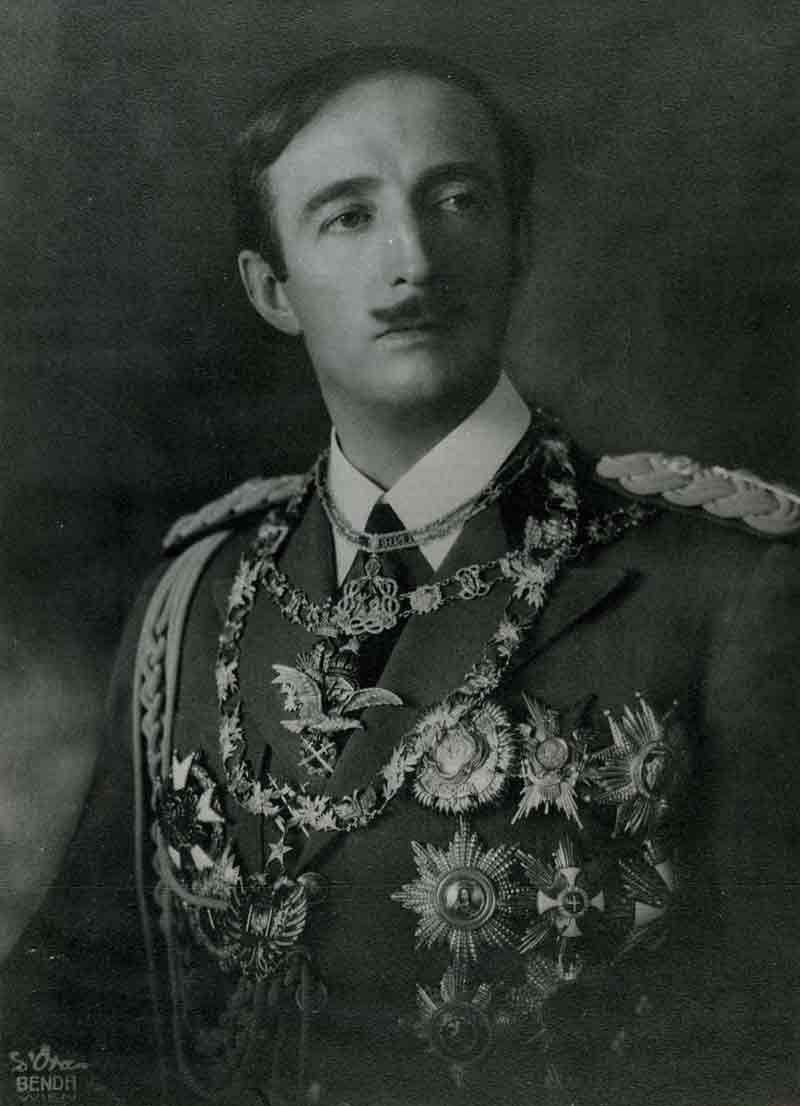 A Statute Commission was created, which proposed a regime change from a Republic to a Constitutional Monarchy. This proposal was approved by a vote on 30thAugust 1928 by the Constitutional Assembly, which proclaimed Albania as a democratic, parliamentary constitutional hereditary Monarchy. A commission was then created which communicated the decision to President Ahmet Zogu, offering Zog the Throne.
On the 1st of September 1928, the Constitutional Assembly proclamation was unanimously put into effect. His Majesty Zog I, King of the Albanians, took the following oath on the Bible and Quran:
"I, Zog , King of the Albanians, on ascending the Throne of the Albanian Kingdom and assuming the Royal powers, swear in the presence of God Almighty that I will preserve national unity, the independence of the State, and its territorial integrity, and I will maintain and act conform the Constitution and Laws in force, having the good of the people always in mind."So Help Me God”!
Manage Cookie Consent
This web site uses cookies to improve the user's experience. Please let us know, if you agree to these cookies.
Manage options Manage services Manage vendors Read more about these purposes
View preferences
{title} {title} {title}