Royal Orders of the House of Zogu

The head of the Royal House is automatically chief and sovereign grand master of the Orders.

When Fascist Italy invaded Albania in 1939, the King of Italy, Victor-Emmanuel III, usurped the crown of Albania and illegitimately awarded the royal orders in a colonial way, using a different insignia and design. Three years later, the King of Italy withdrew all claims on the Albanian crown. Their Majesties King Zog and King Leka I of the Albanians continued to award the royal orders from 1939 until 2011, to individuals who fulfilled the statute requirements of each order respectively in accordance with the 1930 law on Decorations. The Royal Orders are not bestowed posthumously

Show more...
According to the principles involved in assessing the validity of Orders of chivalry, it is generally agreed by specialists that former-sovereigns who have not abdicated retain their full rights as “fons honorum” in respect of those Orders of which they remain Grand Masters. The “fons honorum” of the Royal House of Albania includes three orders of chivalry, including a military order which is organized as a high distinguished military decoration.

Two medals used to exist, the Medal of Friendship and the Medal of Science and Knowledge. These medals are no longer issued by the Royal Family.

Three hundred silver wedding medals commemorated the marriage of Their Royal Highnesses Crown Prince and Crown Princess Leka of the Albanians in 2016.

His Royal Highness Crown Prince Leka II of the Albanians is the Grand Master of the Royal Orders and may bestow the Royal Orders to meritorious individuals’ in accordance with the 1930 law and the Royal Council.


The Orders of chivalry (in order of precedence) 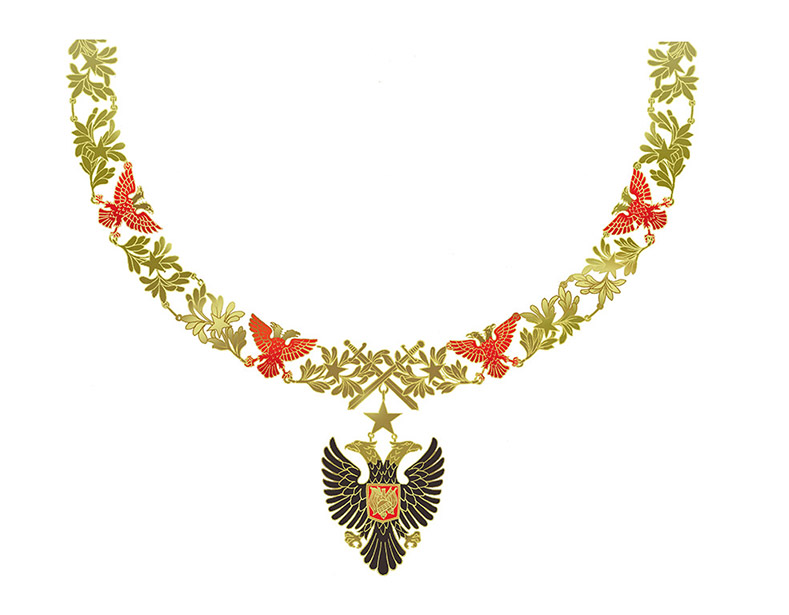 The Royal Albanian Collar of Honor, (Royal Collar of Albania)

Established on the 3rd of December 1925, the Royal Collar of Albania has one class order reserved for the King as head of State, the sovereign grand master of the Royal orders. It may be granted to the Crown Prince and other sovereigns or heads of State.

King Farouk of Egypt and King Albert I of Belgium were both holders of this most prestigious order.
ORDER OF FIDELITY (ORDER OF LOYALTY)


Established on the 22nd of December 1926 by HM King Zog I, the Order of Fidelity (or Loyalty) was intended to reward services to the Albanian Royal Family as well as “distinguished services to the Nation” and remains the senior Albanian dynastic Order.

The grade of Grand Cordon is reserved for His Majesty the King (as Grand Master), the Crown Prince, foreign heads of state, and high-ranking diplomats, and there is a limit of six Albanian Grand Cordons. Notable Grand Cordon recipients have included HM King Farouk of Egypt, HIM Reza Shah Pahlavi of Iran, Prince Abib of Turkey and Egyptian President Anwar el-Sadate. The Badge is a gold double eagle enameled in black, with the inscription BESA in gold on the breast.
Gold swords, points down, form a cross between with the E and the S. A gold Albanian “goat-helmet” (Helmet of Skanderbeg) is suspended from the eagle by a fine chain.

A gold six-pointed star with the rays decorated with leaf impressions. In centre of the badge, the black double eagle is surrounded by a silver wreath composed of double eagles and batons, with silver double eagles issuing from the wreath on each point of the star.
Riband: Light blue, with narrow black / red / black centre stripes. 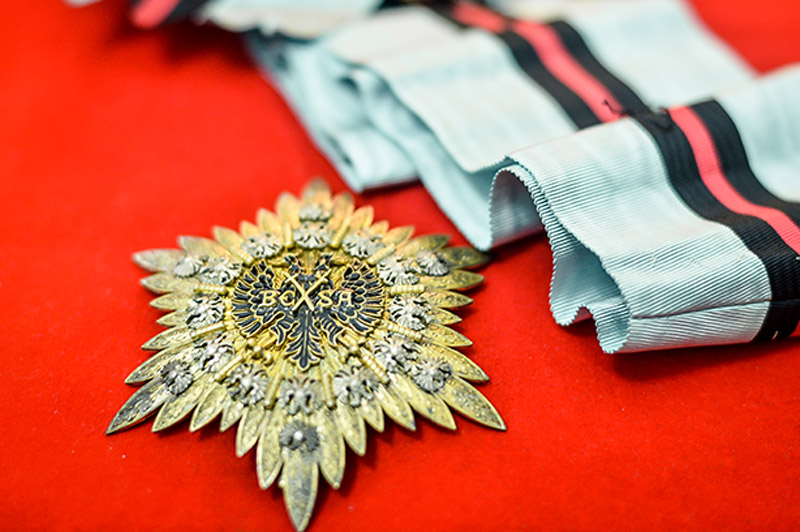 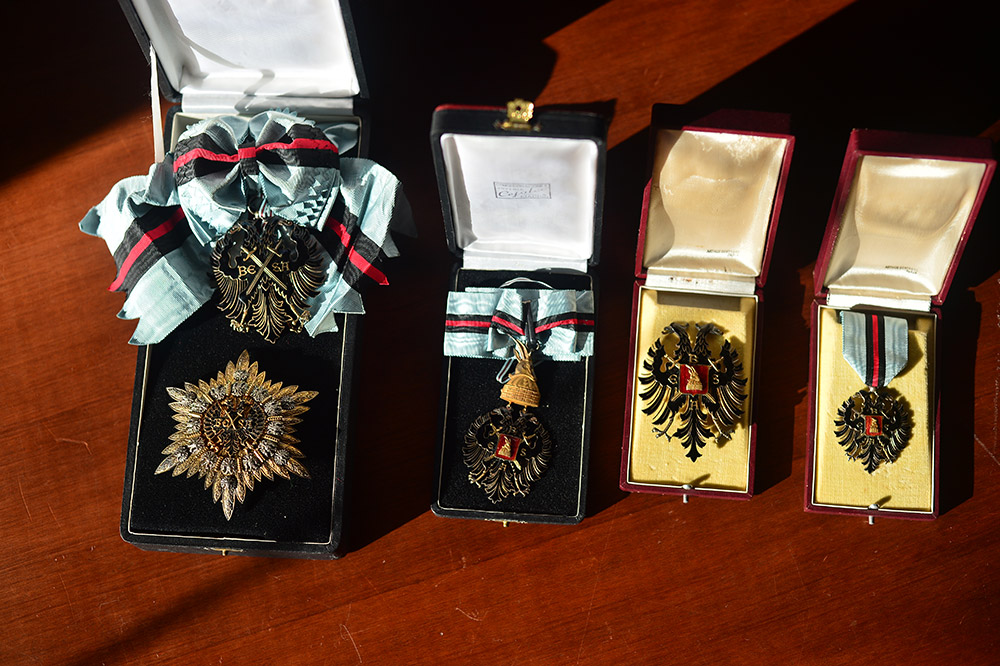 A. Grand Cordon with Star

The Royal Order of Skanderbeg, named in honor of the 15th century Albanian national hero George Castriot Skanderbeg, was established on the 3rd of December 1925 by His Majesty King Zog. The Order rewards civil merit towards the Crown and Nation, and is awarded in five classes, with both Albanians and foreigners eligible for membership.

The grade of Grand Cordon, conferred on senior officials, diplomats, and particularly meritorious individuals, has a limit of 40 Albanian members.

This Royal Order of Skanderbeg should not to be confused with a 1945-91 decoration awarded by the Albanian communist government, nor with the current Albanian Republic’s medal of “George Castriot”, which has a different design. 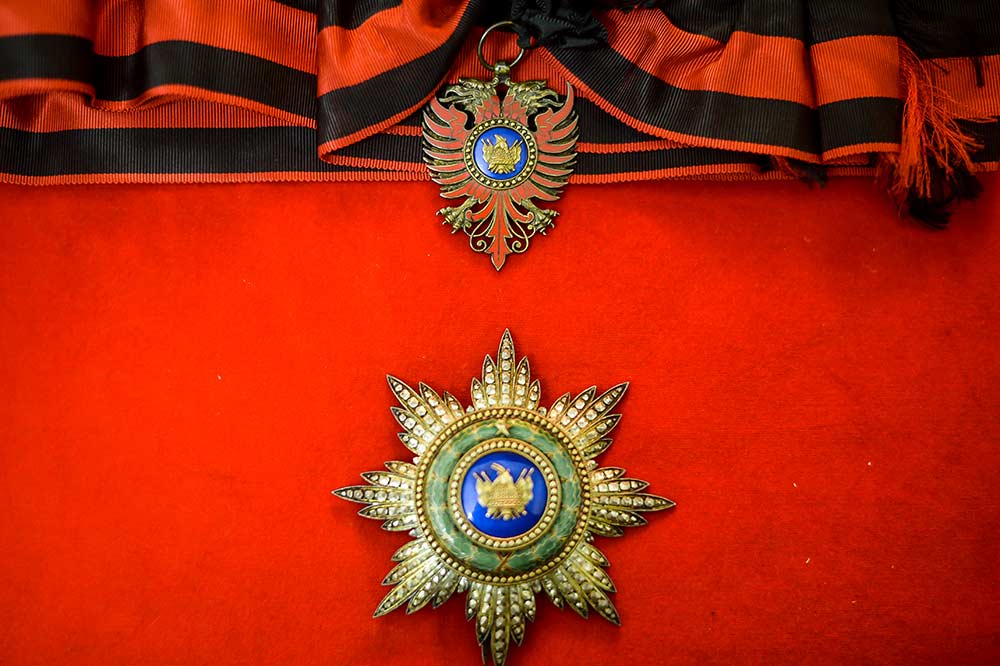 A gold double-eagle enameled in red, bearing a blue medallion on its breast depicting an Albanian crown

The medallion is within a gold circle bearing a green enamel wreath with a small star at top. The Badge is suspended from a five-pointed star.

Riband: Black with red edge and red stripes near edge. 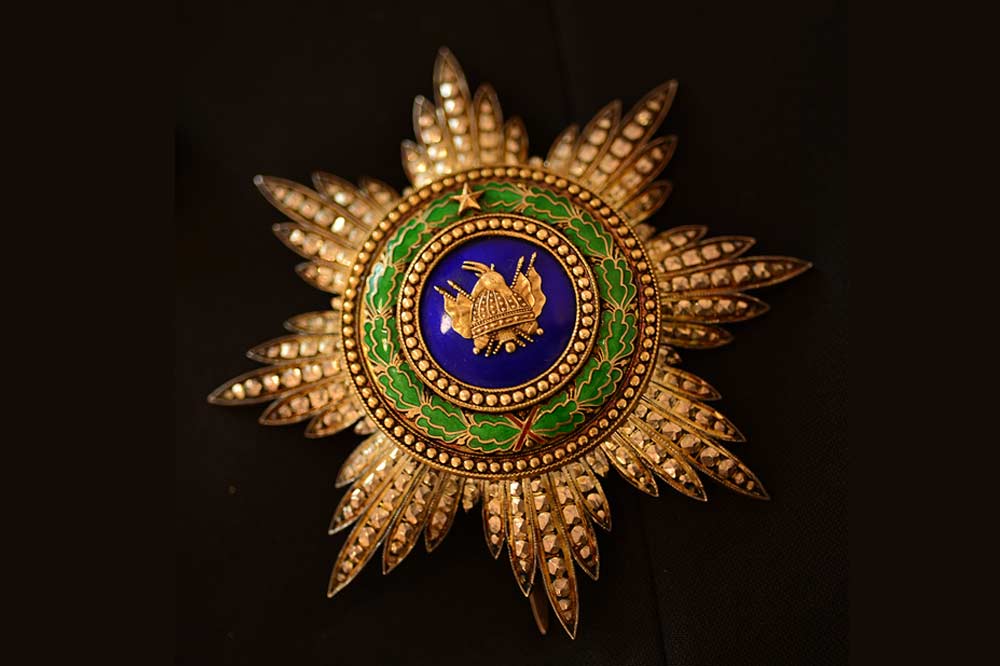 The Order of Bravery was established on the 10th of January 1928 by HM King Zog. It is the highest Royal military merit award, accorded to officers and members of the armed forces who show extraordinary bravery.

King Zog was the unique bearer of the highest rank (Hero). Only one other person was decorated with the rank of Hero, General Abaz Kupi. Abaz Kupi was the leader of the royalist resistance in Albania during the Second World War.

The Military Order of Bravery is no longer given by the Royal Family.

The Hero star is a 5-point white Maltese cross with a double headed black eagle centered on a red background. The 5-point cross is circled by a golden laurel.